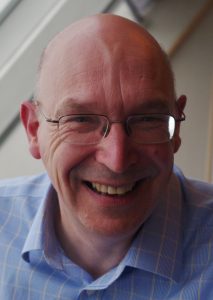 David Heywood recently retired as Deputy Director of Mission for the Diocese of Oxford, where his role was to oversee Continuing Ministerial Development, curate training and local ministry training. Previously he was Director of Pastoral Studies at Ripon College, Cuddesdon.

David graduated in History from Selwyn College, Cambridge in 1976. He taught History and Religious studies for three years at Lea Manor High School in Luton, Bedfordshire. In 1980, he returned to university at St John’s College, Durham to prepare for ordination to the Church of England ministry and continued in Durham to study for a doctorate in Theology and Education.

David was ordained in 1986 and served his title at St Luke’s Cheltenham in the Diocese of Gloucester. He then became team vicar of St Antony’s, Hamsey Green in the Sanderstead team ministry, South Croydon. During his eight years in Sanderstead, he also taught Old Testament on the Southwark Diocesan Reader Training Course and then for the South East Institute for Theological Education (SEITE), now St Augustine’s College.

In 1998, David became vicar of St Paul’s Edensor, Stoke-on-Trent (now known as St Paul’s Longton Hall) and over the next four years led the parish in the direction of community mission, forming partnerships with local residents, voluntary and statutory agencies to engage with one of the most needy parts of the parish.

While vicar of St Paul’s, David also ran a course for the Lichfield Local Ministry Training Scheme, preparing people to become trainers in their own churches. From 2003, David began to work part-time with the Local Ministry Scheme, writing and teaching courses on mission, church leadership and theological reflection. He also acted as Deanery Ministry Development Adviser, helping to facilitate mission and ministry in several parishes in Stoke. In 2006 he moved to a full-time teaching role at Ripon College Cuddesdon, working with both the residential community and the Oxford Ministry Course. During his time at Cuddesdon he also developed and helped to lead an MA course for clergy in the Church in Wales Diocese of Monmouth who had been invited to become leaders of the diocese’s new ministry areas.

David is married to Meg, who was ordained to the Church of England ministry in January 2007. Meg is associate minister in the Damascus parish, between Abingdon and Didcot. She also offers spiritual direction and leads retreats.

David and Meg have four children. Naomi (38) teaches music at a high school in Evesham, Worcestershire. Joseph (36) works as a business analyst for Sky Broadband. Stephen (32) is a freelance lighting designer and engineer and Susanna (25) is a post-graduate student at Kings College London, research medieval political philosophy.